Looking back on the first International Repair Day

Last Saturday, on the 21st October, we celebrated the first ever International Repair Day, which will fall on the third Saturday of October every year from now on. We’re just getting started, and next year will be much bigger, including government, businesses, and media. This event hinted at the potential for a truly massive, global mobilisation for repair on 20 October, 2018.

We counted over 65 events all over the world where people got together to fix their broken things or lend a hand to someone else. The global effort was boosted by a great concentration of Repair Cafes in Europe. You can see a map of locations here.

We also had people spontaneously share DIY repairs with us and repair businesses from the desert US, to Iran and Nigeria shared their work.

In London, The Restart Project held Restart Parties in Tooting and in Leytonstone.

We had a great #RepairDay in Leytonstone and #Tooting on Saturday. This participant fixed his tablet and his coat. @tttooting pic.twitter.com/dAiLlzEuRv

As always, not every repair was successful… But even if you don’t go home with a fixed item, at least you’ve got a diagnosis, and more importantly – new repair skills.

#RepairDay Some you win, some you don’t. No help for a stripped cog on CD drive @RestartProject pic.twitter.com/RwMJXnhfIm

Leicester Fixers attended Creat-A-Con, an event to get young people into STEM, and drew in some young repairers

In the UK, Repair Cafes occurred in Bristol, Exeter, Manchester, Winscombe, and York (just their second!)

#York #RepairCafe up and running at Clements Hall until 1pm today #RepairDay – we can do sewing, bikes, small electricals, jewellery & more! pic.twitter.com/UvZ8KN4F41

Thanks to all who came to the #BristolRepairCafe & helped celebrate #RepairDay. Some of our repairs pic.twitter.com/fsnb6XDjCn

Further afield, Restarters Barcelona were very busy getting through a toaster, an electric toothrbush, and a kitchen robot – among other things

Iranian fixers took to their workshops:

In Argentina, the Club de Reparadores declared: “We will not take ‘broken’ as an answer!” They supported friends across the river in Montevideo, Uruguay to run a community event.

In California, the Fixit Clinic popped up in Huntington Public Library: 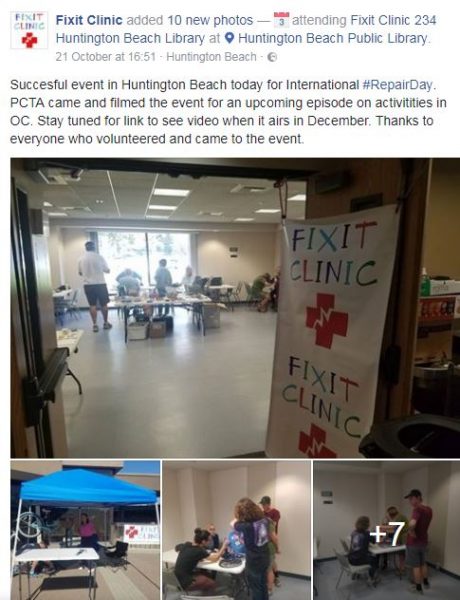 iFixit in the U.S. put together a great list of ways to participate – and even sticking to electronics repair, they don’t all involve getting out a screwdriver.

People celebrated repair day in all kinds of ways – from fixing broken surfboards to darning socks – or even just paying tribute to an old, well-loved item that has hung on through the years: